Over Compensating within Chinese society

[...] Symbolically 'compensating' occurs on a large scale in a hierarchical society like China. Interaction is based on inequality. Compensating is a way of receiving more respect and improving one's rank. [...] 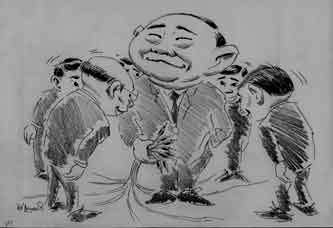 [...] Chinese are raised with the idea that 'compensating' is a necessity in order to attain a high position in society. It gives them respect and power. They all want a position of power within a company or the government and do not necessarily question whether they are capable and suited for the job. [...]

[...] In Western society we also believe that the first impressions are incredibly important. People often judge others based on the very first impressions. In China, however, impressions take a little longer to formulate and even longer for them to divulge their feelings. [...]

[...] If you do not know this, their behavior could be interpreted as low self-esteem and you might doubt their qualities and capacities. Western philosophy is to sketch a realistic image of yourself, sometimes even a little better than what is true to garner faith from others. A Chinese worker in a Western company in China said: "Westerners tell others how good they are and Chinese tell others about the problems and how it could be better. This is a fundamental difference in attitude. Chinese consider being satisfied with yourself a great danger." [...]

[...] The Chinese take their time to form an opinion and will not show any sign of what he thinks of you until he trusts you. For us this is annoying because we want to know almost immediately with whom we are dealing and what the person thinks of us. Westerners do not necessarily find the Chinese way and strategy very endearing. Chinese will not show their status or power during initial meetings. [...]

[...] For Chinese, symbolically 'compensating' is an obsession, which they work on continuously. I advise you to take all opportunities to preserve their image and enhance their status and respect. A manager said: "Do not confuse 'face' with the fact that you should not be clear or direct. When you show them in a clear manner where the borders are and what they are expected to do, you will receive respect. When you also manage to be consequent in your actions, you will even receive more and more respect ..." [...]

Go to Fighting within Chinese society